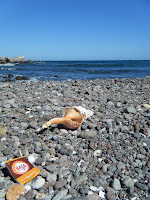 Sea Kayaking, the recreational activity where sometimes no matter how hard you try you achieve less. I'm talking about paddling into the wind, which is pretty much all we did on days 2 and 3. It was good though, all part of the challenge. Also, paddling into the wind is a convenient excuse for only paddling 3 or 4 hours a day, as opposed to the 6 or so originally planned. It is easy to overestimate one's ability/motivation...
Quickly we settled into a routine - get up early and get out before the wind picks up. Generally Zack would get up first, reluctantly wake me up, do our morning stuff (occasionally we would explore a bit around our campsite), then paddle for a couple hours, break for 1-5 hours, then usually set out again for 1-3 hours. Things move a little slower and more erratically in Baja, but you get used to it ('tranqilo hombre! were in Baja!'). The kayak trip reflected this go with the flow attitude, but we were still intent on finishing the 200km (or so) journey.
Generally I'm not a fan of wind and kayaking. It makes things complicated.Go into the wind and muscle through. Be hit at 90 degrees so the waves are hitting you broadside and that's the most likely scenario where you flip. If the wind is behind you that is the best, unless you're riding big waves, which is scary as hell (imagine being stuck in a big wide half pipe and the half pipe is moving). Sometimes the wind and the waves are moving in different directions. Often the waves, bouncing off the shore and refracting, get mixed up in what's know as a 'confused sea'. No wind = no waves, so we became pretty motivated to get up early before the wind started blowing.
Here's a link to a map showing our route with campsites and points of interest marked
Below is a more detailed daily itinerary:
Day 1 - we head west from Bahia Coyote, across the big Bahio de Conception, camp on the other side. Met a fishing crew skinning their sharky catch by the beach and watched hundreds of birds hang out in the 30m radius of where the fishermen were throwing guts onto the shore - gulls down the beach, turkey vultures inland, swallows just to the sea side swooping around the air in tight pattern, and Alcatraz pelicans cruising and perching farther out. All birds had their turn at the guts, though my human perception couldn't understand why the birds weren't pecking at it faster in the dwindling sunlight, then remembered I'm in Mexico. The fishers also left some bait fish, which we snagged and grilled up with rice and beans. Marvelled at the beach/dessert contrast of the land, took some of the millions of shells that littered the shore, gawked at blowfish carcasses, and had a hard time believing that, according to our maps, in the flat and totally empty scrub just behind our beach campsite was an airfield and a ranch. 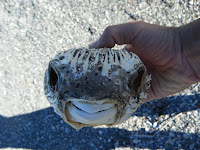 Day 2 - Explored for a bit. Finding no trail to supposed pictographs, we paddle out at a leisurely 9:30, heading north, hoping to get around the huge Conception peninsula. A north wind (that is, coming from the north) started blowing fairly strong by 10:30, and four hours of paddling later we find ourselves only about 15kms farther, we stop and climb a mountain instead and took some photos, videos and beers into the sunset. Marvelled at all the desert plant life. 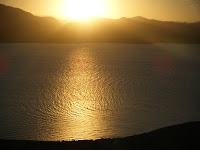 Day 3 - Start out early but the winds pick up sooner. The prospect of big waves going around the outside of the big Conception peninsula didn't faze sea kayak guide Zack, but they were the biggest waves I've ever been in, and they were hitting us roughly broadside. We managed to go all the way around the north shore, and turning south we started going with the big waves and involuntarily surfing them - very exciting! I also notice how were going 2-3 times faster, going with the wind and the waves. We would in general be going with the predominantly north winds from now on. Land in a very nice isolated cove with three beaches. We land on the most protected one and explore the very cool double-arch rock formation with a little shrine to St. Mary in it, and fishing camp on the other side of the cove. 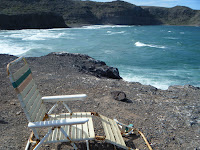 This post and the map link have taken a long time to make, so I'll end it there. Cheers!
Posted by Matiss at 11:35 AM