To better see what Zack and I were doing, check out da map Day 7 - Woke up on the shore to see a rising sun going over the massive Punta el Pulpito, a major point, rising 200m above the sea, jutting out a kilometer from the mainland, like a pulpit or a fortress. This is said to be one of the most dangerous places to kayak in the Sea of Cortez, and Ronaldo told us that in the 70's several members of another NOLS course died there. Lucky for us there were no waves that morning as we coasted along the cliffs and admired the birds and fishies swimming around giant under water boulders. There were two huge arches, one more like a 40' tall tunnel, that made this a highlight of the Odyssey. Around the point we beached and climbed up for fantastic views. Spent the rest of the day heading further south and stopping at a beautiful protected cove with a sandy beach. Met some local sand and sea bums who fed us clams and fish they caught and gave us pointers on how to catch both, which we never managed to do. 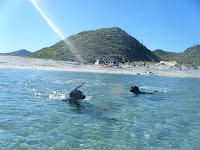 Day 8 - Spent the morning fishing but only caught a dogfish - which are inedible and mangy looking. Headed out of the cove saying goodbye to the sand bums, who were planning on paddleboarding all the way to Pulpito and back and to climb it... They were fit. A couple of dogs from near by swam out with us as we left. Went into the very picturesque bay just to the south and admired the rocks, villas and yachts there. Stopped on a beach and goggled and tried clamming with no success, but I did snag a big oyster! Later shadowed a sailboat for a while and then found Captain Barnacle's cave. There the gentle waves washed into the 50' deep/40' tall cave. A dark crevasse inside the sea cave made a deep crashing sound with the waves that caused my heart to shake, and so that was the Captain's soul still beating. I'd say that cave was the single coolest thing we saw the whole trip. Hung out there, then continued down the cliffy and totally exposed shore until the next big bay where we cooked our oyster. 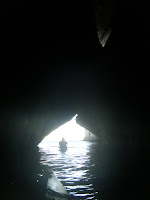 Day 9 - Checked out an abandoned resort that turkey vultures had taken over. Headed out with the mild wind and waves at our back, passed a busy fish camp where an anchored boat's motor wouldn't start (they didn't wave to us...), and the shore became very green and mountainous. Even though it was green and looked tropical from a distance, it was most definitely all very spiky and prickly desert plants. Stopped at a cool shore cave for a while before continuing the day covering a lot of ground. We stopped at a rocky beach and crash landed due to the rising swells. This shoreline was amazing, with green mountains behind and very cool headlands around, and we decided to drink the rest of our alcohol and chill out on the rocks. 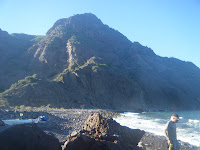 Day 10 - Set off early after sleeping on the shore. Crossed over to Isla Coronados. There we stopped on a beach, swam for a bit then headed up the long dormant volcano there. The hike was brutal and hot, all loose rocks, steeps and pointy cacti, we didn't bring enough water and Zack was in his sandals. It took longer than we thought in the HOT afternoon sun. We got some of our best pics up here though. Headed back down and chilled out on the beach on our last night of the kayak trip. That night we both saw the legendary Baja fireball - something between a shooting star and comet, like a bright orange ball slowly coming into the atmosphere and it looks like its dissolving leaving a big glowing orange cloud behind. I've never seen anything like it, and doubt I ever will again. I wonder if it could mean anything... 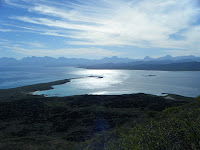